My almost-three-year-old son Thomas started going to nursery recently. It's been two short weeks from screaming, sobbing abandonment trauma to essentially telling me to piss off after I take him through the door. Oh, and he's in love with a boy called Stanley, apparently.

This coming weekend I will be attending my first Birmingham International Comic Show. I'm going to try to have a new Doctor Sputnik minicomic ready, but I'm not making any promises. Sleep might take priority. Otherwise, expect more of the usual from me -- sketching, selling books and artwork, and showing off photocopies of anything vaguely recent to anyone who's interested. I'm skipping the Friday Night Launch (mainly because nobody told me there was one until after I'd booked my hotel) but I'll be there Saturday and Sunday. And, after my shameful display of hangover at the Bristol Comic Expo earlier this year, I will attempt not to vomit in front of any more children.

Currently finishing off the Time Out piece (four pages to colour today, wish me luck) and writing a six-page Captain America all-ages story set in World War Two. Interestingly, being all-ages, I'm not allowed to use the word "Nazi". I'm not sure pretending they never existed is the best approach, but it does mean my focus is less on the front lines and more on home front saboteurs and plucky girl reporters (I'm calling her Rosalind Hepburn!) and such stuff. Starting to come together, anyway. If I get my druthers I'd like to have the splendid Rob Davis on board as artist -- not sure Marvel will go for it, but I'm fighting. I'm fighting! I'm writing with him in mind.

Lastly, for no reason, here's a page from an abandoned project that will probably never see the light of day otherwise. That's what blogs are for, I guess. 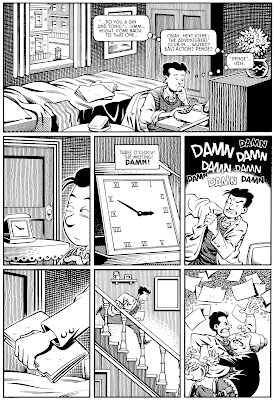 Right. Birmingham!
Posted by Roger Langridge at 6:46 am