Almost done with 2010, everybody? Grand. 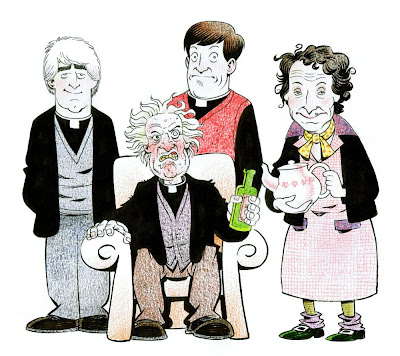 Here's a recent commissioned sketch I did - I don't do a lot of commissions because they chew into time I could be spending on, you know, meeting deadlines, but every so often I buckle and weaken. This one was of one of my very favourite sitcoms ever, Father Ted, so I couldn't resist. Having lived in the UK for close to 20 years now, there's one thing I'm very, very proud of about my adopted country, and that's the generally high quality - and often surreal, absurdist, Carrollian imaginativeness - of their comedy. Father Ted, produced for Britain's Channel 4 in the 1990s, is the best of the best in that regard. The commission also included some dialogue, but I've Photoshopped that out of this post because it's none of your business, you nosy, nosy people.
Posted by Roger Langridge at 5:53 am

Email ThisBlogThis!Share to TwitterShare to FacebookShare to Pinterest
Labels: sketches

Buy the collection of 2020 diary strips from the web store!