Just back from the lovely Bristol Comics Expo to find a heavily-groaning inbox. Phew! Thanks to everyone for the words of support! To clarify, the "quitting" story is just a teensy bit out of proportion - it's about a decision I made last summer, and I didn't "quit" anything because I wasn't doing anything for either Marvel or DC at the time. There's no story there, really. But trust good ol' Bleeding Cool to make one out of fairy dust and gossamer, like lightning, ten months later. Bless their cotton socks. (Rich, I'm just teasing. Although I shall be calling you "Scoop" Johnston from now on.)

I stand by the decision, though, whether it was made ages ago or not. I mentioned it on the Orbital podcast because felt like I needed to stand up and be counted. I suspect the generation of cartoonists who come after me will ask what I did in the war, so to speak, and I'd like to answer them without blushing. So - no regrets.

To the wag who asked where the money I made from Marvel will be going now (tee hee!): a chunk of it is going towards the Kickstarter campaign to get curriculum-based comics into schools. There isn't that much left after that. (I only wrote a couple of books for 'em!)

And now, courtesy of the talented Messrs. Chris Schweizer and Paul Maybury, some pictures of Superman with a duck on his head. 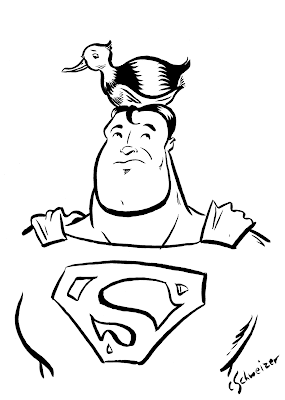 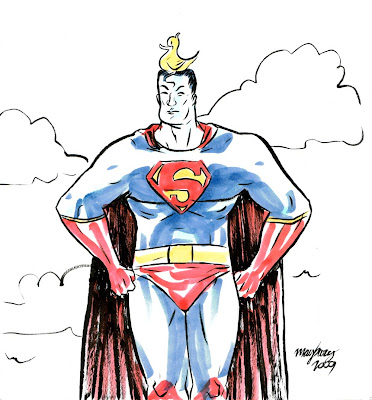 Posted by Roger Langridge at 9:59 pm

Buy the collection of 2020 diary strips from the web store!