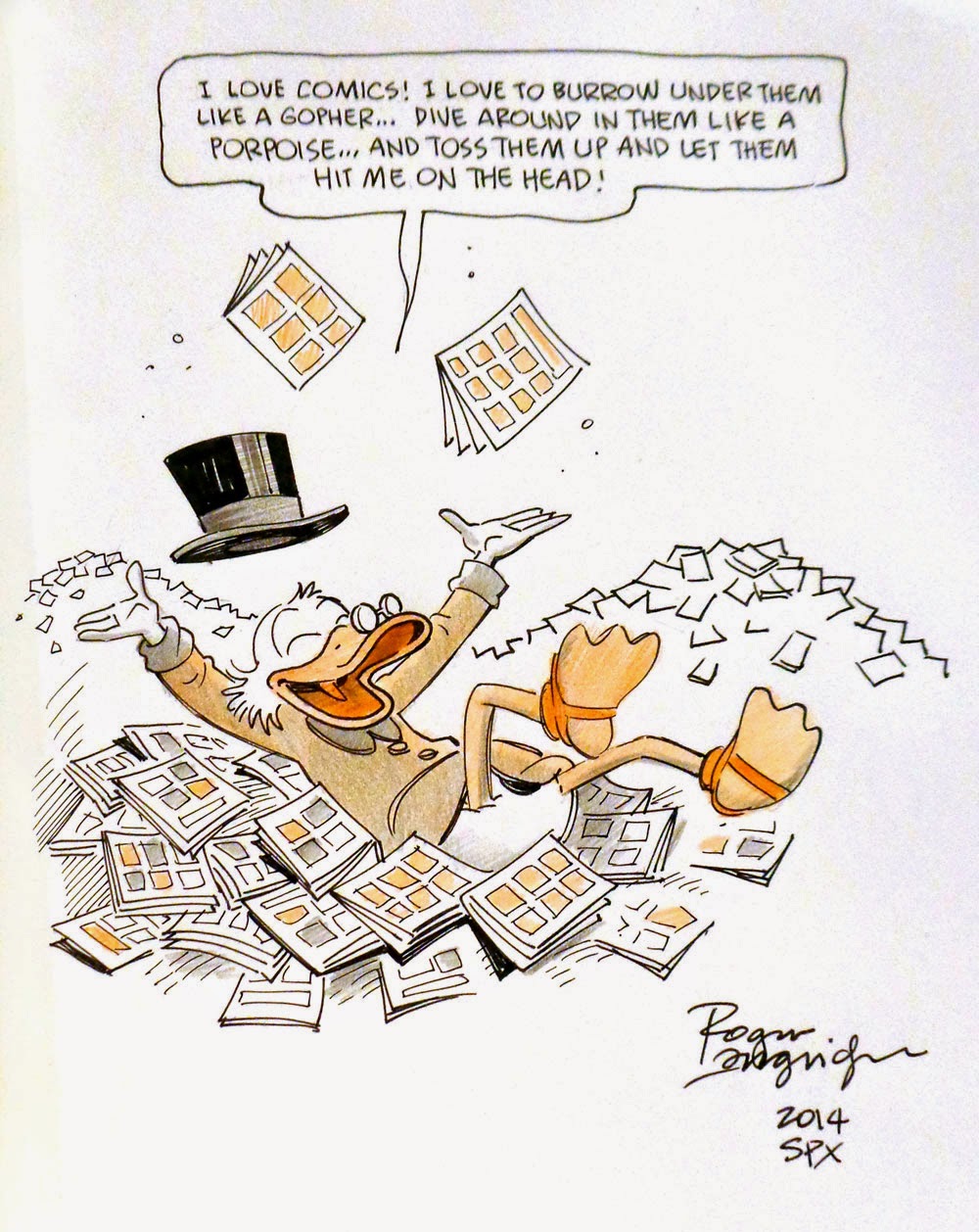 I attended SPX this past weekend. As usual, I had an excellent time. Despite it not being a successful trip from a financial point of view (although I covered my biggest expense, I'm still somewhat out of pocket at the end of it) I'm really glad I went. I find I need SPX in my life every so often as a kind of course corrective; a reminder of the kind of comics I ought to be doing.

I have a really strong attachment to this show. SPX was the first show I ever attended in the USA, back in 2000. I was just there as a visitor, not even as an exhibitor; it was the year Will Eisner was there, I remember. I bought minicomics from Craig Thompson. I met Dean Haspiel for the first time, who went out of his way to make me feel like a part of the community, which I will always be grateful for. Attending that show energised me to turn my Fred the Clown webcomic into a self-published comic book, which in turn has led to every opportunity I've had in comics since then. Without SPX, it's probably fair to say that my subsequent career wouldn't have happened.

So I keep coming back. Not every year, but I try to do at least every other year. And each time, I feel like it's a timely reminder that these are the kinds of comics I ought to be doing: comics straight from the cartoonist's brain to the reader's hands, without compromises.

I know I am very lucky to have the career I have. I am currently earning my living by making comics originated by me and owned by me, and that's a rare privilege in this business. But even these comics are... compromised is far too strong a word, but maybe "calculated" serves the case better. Calculated to appeal to a specific audience, to a specific publisher, to specific expectations that an audience now brings to any book with my name on it. And that's fine; when all is said and done, if that's what I have to do to earn a living making comics with my own characters and my own stories, I will calculate like an accountant suffering from an obsessive-compulsive disorder. But... making those comics is now, for better or worse, my day job. It's time I got back to setting aside one day a week to make comics that come straight from the heart as well, like I was doing in 2000 with Fred the Clown. Comics produced with no financial motive whatsoever. Comics I make just because I think they ought to exist.

All of which is a roundabout way of saying that this year's SPX was a welcome bucket of cold water in the face, a timely reminder of the fact that there are other kinds of comics I could be doing – not necessarily instead of, but at least at the same time as, the ones I'm currently making. So, starting immediately, I will be taking steps to do that very thing. More importantly, to do it regularly, one day a week, and not just when I have an idea for a minicomic once in a blue moon. Doing my own, uncalculated, straight-from-the-gut comics needs to be a central part of my life again. This is something that I have known for a while on an intellectual level; the difference between this time last week and right now is that now I feel it right down to my bones. I feel now that it is less a matter of "wouldn't it be nice" and more a matter of creative survival, artistic necessity. Of being the cartoonist that I could be. I can't promise you'll see the fruits of this immediately, but I'm quietly confident it'll happen sooner rather than later.

I will close by saying hello and thanks to the people who made the weekend what it was for me, from the organisers and my fellow exhibitors to everyone who came by my table and bought something or just said hello, to every kid half my age who was there showing me how it's done. You know who you are. Until next time.

Posted by Roger Langridge at 10:25 am