Will Sketch for Chips

Phew! What a weekend. Heroes Con has now come and gone, and I had a fantastic time. A quick thank-you to everybody who stopped by my table, to all the people I met who made it so much fun, and most of all to the organisers, those splendid chaps at Heroes Aren't Hard to Find, who made the show go smoothly. It's like watching a swan sail across the surface of a pond - it looks so easy and moves so gracefully, but you know it must be paddling like hell under the surface to do it. 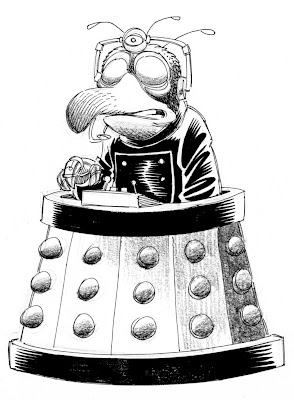 Did lots of sketches! Oh yes! And by the end the requests for Doctor Who/Muppet mash-ups were coming thick and fast. Unlike many previous conventions, I didn't get to bring a slush-pile of unwanted sketches back with me, but I reconstructed this one from memory on the plane home.

A few highlights worth mentioning:

* Alec Longstreth insisting I experience a Dairy Queen to get "a taste of the real America". (Clockwise from top left: Me, Greg Means, Alec, and Mr Phil of Indie Spinner Rack)

* Spending time with super-nice, super-good cartoonist Chris Schweizer (left to right: Gentleman whose name escapes me, Chris, Kevin Burkhalter, Drew Weing, Joey Weiser, another gentleman whose name fell out of my brain sometime between hearing it and now - my apologies!)

* Getting to experience Muppet Madness close-up! Over in the land of not-allowed-to-import-it, I've been a bit sheltered from all of that up until now.

* The effervescent Dustin Harbin - the only photo I got of him this year was a piss-poor blurry shot from Saturday night's auction (red t-shirt). He's not usually that blurry.

* Talking with Ben Towle, Jim Ottaviani, Craig Fischer and friends after the auction and totally forgetting to take any pictures

* The after-show party at the Heroes store. A very civilised way to end the show. Here are some of the people I got to hang out with:

... Joey Weiser and Mike Maihack (that's me on the end looking vaguely camp)...

I had a long flight home on Monday with a stewardess who talked to us all like schoolchildren and inserted announcements about "remembering our boys in the troops", which could have been funny if it wasn't so annoying. Then home to family, kids, cuddles and sleep. Lots and lots of sleep.
Posted by Roger Langridge at 6:59 am 11 comments:

Only a couple of days now until I get on the plane to go to Heroes Con, and very much looking forward to it. For those of you attending the show who might want to track me down, I'll have a table at the Indy Island section, and will also be doing a panel on Saturday at 12:30pm, Making Comics for All Ages, with Jeff Smith, David Petersen and Chris Schweizer ("and more", it says on the schedule - possibly Don Rosa, who will be attending the show? Fingers crossed!).

Now, who can spot the difference between the cover above and the published version? Any ideas? Check out the audience members four rows back, between Gonzo's arm and his head. Yup - Bert and Ernie. I'm not allowed to use Sesame Street characters on the Muppet Show comics, but at the time I drew this cover I wasn't aware of that, so I tried to sneak 'em in. But I got busted! Still, makes a nice little curiosity for the old blog.

One more thing about Heroes Con - I will be sketching! Yes, I will! I'm going to try an experiment this year and have a Tip Jar, the idea being that you pay me whatever you think your sketch is worth. So everybody can afford one - no excuses!
Posted by Roger Langridge at 6:23 am 5 comments:

Email ThisBlogThis!Share to TwitterShare to FacebookShare to Pinterest
Labels: Muppets, work in progress

Thanks to the handful of people who've sent me a note saying they'd like to follow me on Twitter. I'm afraid I don't do Twitter. I can't see the point of getting up and running over to the computer every half-hour to tell the world I've scratched my arse. Because, frankly, that's what you'd get -- my life ain't that scintillating. And I can't see that I'd get anything out of it on my end except a colossal drain on my time. If anybody's got a persuasive argument in favour of the blasted thing I'll give it a hearing, but I've yet to hear one that doesn't sound like a justification for faffing about instead of working. And I'm perfectly capable of faffing about on my own. Sorry, folks, but there it is.

Here's my back cover to the new Indie Spinner Rack anthology, Awesome 2: Awesomer, which is out around now. It concludes a narrative begun on the front cover by Jeff Smith which continues throughout the issue. The line-up in this one looks absolutely stellar, and it's my first time being published by Top Shelf after dancing around one another for over a decade. Highly recommended.

Heroes Con is just ten days away. Cushlamochree! Last year I had a blast and I'm thrilled that I've been asked back. (Guess I can't have been as drunk as I thought I was.) I normally like to have something new to sell at a convention, but I've been so busy with Muppet stuff that I haven't had time to do any new mini-comics apart from those. What I will try to have that I didn't have last year, though, is a convention-only special sketchbook mini. I'm looking at a stack of sketches about a foot high and I'm sure I can cobble something together out of that before the show. So, yes, I will have something new. I'll also have copies of the Mugwhump the Great mini-comic which debuted earlier this year at the UK Web and Mini-Comix Thing, collecting Chapter 1 of the online strip. So you've no excuse for not spending money.
Posted by Roger Langridge at 6:21 am No comments:

Further behind schedule than ever on the Muppets, but The Treasure of Peg-Leg Wilson #1 is only a couple more days away from completion now. I spoke yesterday to some cartoonist friends who, concerned for my health, kindly pointed out that nobody else writes, pencils and inks a monthly comic single-handedly. "Nobody else. Just you."

Now here's an illustration I did a while ago (judging by the art style). The name of the file is "Egghead and Zzapboy", but for the life of me I can't remember a single other thing about it. Who was it for? (affects Pee-Wee Herman voice) I Don't Know! Answers on a postcard please. Actually, writing these words, something comes back about the Egg - I originally drew him dour and professorial, but the client kept asking me to make it look more and more like "he was having a good time" until the final version looked completely unhinged. Who was that masked client? Shucks, Jimmy, I don't know.
Posted by Roger Langridge at 6:31 am 4 comments: