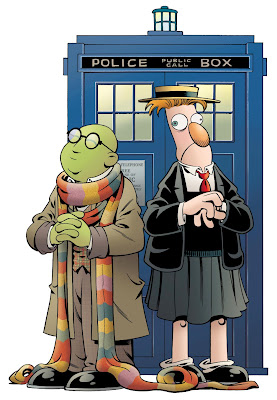 Conventions are upon us! This weekend I'll be a guest at the Bristol Comic Expo and its sister event, the Small Press Expo, at which I'll be doing a workshop for the under-12s (which I've yet to prepare -- eek!) and signing and sketching. This will be the first show I've been to for many a long year where I'm not an exhibitor, so I won't have a table for a change -- so check the schedule if you want to track me down (at this writing no official timetable is on the website, but there should be something at the actual event).

And, continuing our convention theme, this week's illustration is one I did for Heroes Con's convention booklet. The original art for this will be auctioned there to help defray the expense of hauling my arse out there in the first place.

Got a look this week at the beautiful artwork Jeff Parker is doing for my incredibly stupid Uncanny X-Men: First Class two-pager. It's the gorgeousest!

Last but not least, there's a short interview with me at ToughPigs.com on all things related to The Muppet Show Comic #2, which critics are already calling "not as good as #1".
Posted by Roger Langridge at 6:15 am