First post of the year... and I've got a resolution or two. First one is, I'm going to attempt to post something every day this year, even if it's just a sketch - I've come to understand that, in times when  cartoonists can't expect to have their own comic book series, a website is the nearest thing most of us will ever get to our own one-man anthology. So the goal is to post 365 posts this year, with artistic content in each post. If I skip a day, I play catch-up next day. No slacking! Hopefully I'll find time to do an original strip or two along with the sketches and miscellaneous illustrations.

Resolution Two: to at least write and thumbnail, and ideally complete, a personal long-form project, outside of the direct-market comic-shop model I've been clinging to for the last couple of years. Hopefully I'll still be working there a bit - it pays the bills , after all - but doing something personal that isn't compromised by commercial considerations is important to me, and I need to jump back into that with some urgency. The universe has been reminding me of mortality over the last couple of years in a big way, with serious family illnesses and so forth. Time to stop mucking about!

So here's the first piece of the year - the cover to Popeye #12, the final issue. It guest-stars Billy DeBeck's great strip star of the 20s and 30s,  Barney Google, who's a bit of a personal obsession - I'm really thrilled to be working on a Barney story, the first one not to feature that irritating little tick Snuffy Smith for about three quarters of a century. 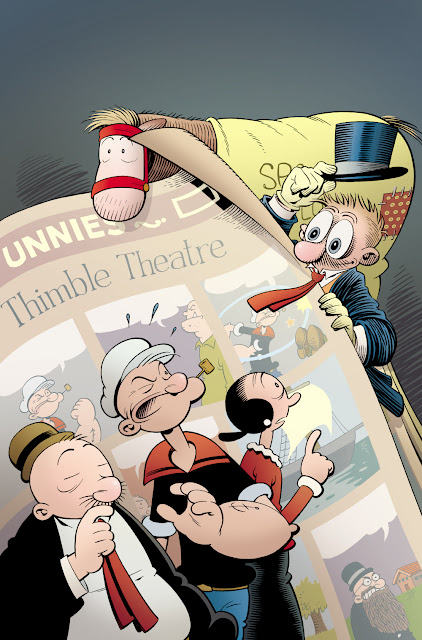 Posted by Roger Langridge at 11:07 am

Email ThisBlogThis!Share to TwitterShare to FacebookShare to Pinterest
Labels: Popeye