Hello! Firstly, because I spoil you (and because I got two pages coloured this weekend), here's this week's Iron Duchess update at ZCO.MX... 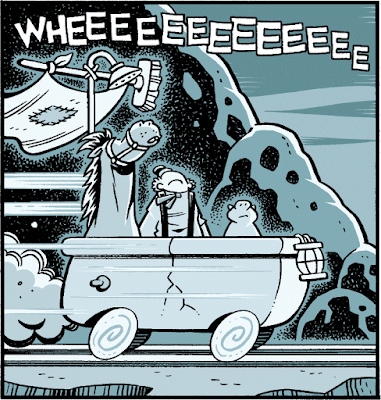 Secondly, we're only a few days away from Thought Bubble (squeals like twelve year old girl)! I'll be at Table 26 in the New Dock Hall doing the usual sort of thing I do on these occasions: sketching, signing, selling books and artwork, trying to eat me sandwiches. Do come along if you're going to be in Leeds this weekend.

Thirdly, something rather splendid arrived in the mail this morning. It's a book to which I made a small contribution called Dinomania, by Ulrich Merkl, about Winsor McCay's fascination with monsters in his work and how they influenced everything from King Kong to Godzilla. My part in this book (a bit of a monster in itself; it's huge!) was to try and reconstruct a recently discovered, incomplete, previously unpublished McCay dinosaur comic strip called Dino. (No pressure, then!) Having seen the printed art for the first time today, I'm actually really, really pleased with how it came out. This one's from our friends at Fantagraphics.

Posted by Roger Langridge at 5:44 pm