Bill and Ted Are Doomed! 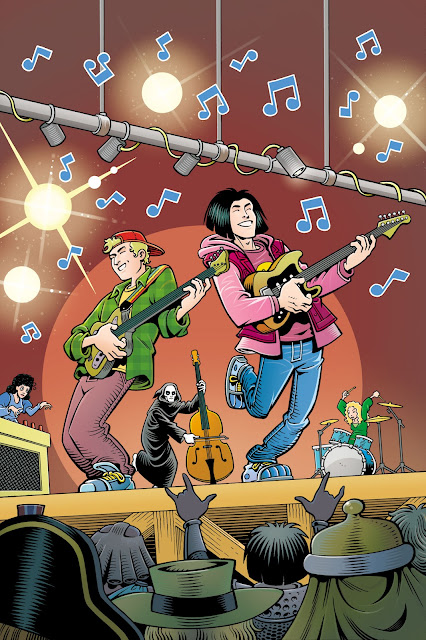 So last night this was announced: I'm drawing a Bill & Ted comic, written by Evan Dorkin, writer of the original Bill & Ted comics in the 90s and one of my very favourite cartoonists.  It'll be four issues, the first one of which is meant to be coming out at around the same time as the film comes out – so the deadlines are pretty tight and I'm working silly hours to get it done in time, but I'm really happy with how it's coming out so far. I'm drawing, colouring and lettering the book. So far we're nearly halfway done - I'm on the home stretch of the inks for the second issue right now. So relieved I can start talking about this publicly at last, it's been quite the big secret to sit on. There's a bit more waffle about it here:

And the Previews solicitation is here:

I'll be posting a bit of behind-the-scenes stuff for Patron Eyes Only over on my Patreon site - some sketches, rejected roughs, work-in-progress stuff, that sort of thing. If you're so inclined, I'd point you towards Evan's Patreon as well. It's here:

This counts as today's daily post because (a) this announcement is quite a big deal and (b) I slept in. Back to the diary strips tomorrow.
Posted by Roger Langridge at 7:41 am